Mothering, making, and generally blathering on

Last week we had big C’s 10th birthday party, her actual birthday, little C’s 10 month birthday, an adult costume party, a costume bingo night at M’s school, and two pumpkin carving parties. OK, that covered about 9 days but still was pretty darn packed. And I don’t even have pictures of it all. Also, several of these events, with the addition of some teething and a cold for little C, also led to some late nights/sleepless nights. I am sure this week, with flu shots, the last soccer game of the season and Halloween will be so much easier, right?

The spa portion was at a kids spa nearby and each girl was able to get two services (hair, makeup, facial, mani, pedi). The girls had a blast.

They did a “runway” show at the end, walking the pink carpet, but I think M more sashayed. C recently got her braces off and now wears a retainer, not sure if she is trying to hide it in these pictures or just striking a serious pose?

Then it was home for pizza and ice cream cake, watching The Princess Bride, and not very much sleeping. How can those kids stay up so long? Eventually I sat in the room where the girls were (supposed to be) sleeping, in the dark, for about 45 minutes until I was fairly sure there was deep breathing all around. Then, it being 1:30 in the morning, I went to bed. Yet one girl still claimed the next morning to have not slept at all. And most of them were up by around 6:30 anyway. Phew. I think C was happy though. Not sure how many of the girls noticed the banner she had created for herself… 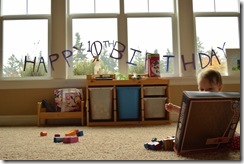 Tuesday C actually turned 10 and between present opening, a dinner/fro yo outing, and a trip to the orthodontist the day was fairly packed. C is a pretty awesome kid although there has been some tween moodiness lately. She reads a ton of books, sews when the spirit moves her, plays a lot with her Monster High dolls (and includes M in her play a lot), likes to make projects in Power Point and is rocking out at school. She has a good group of friends, will go into the store on her own to pick up coffee for me, and tears up talking about a book she heard at school where a baby misses its mommy. 10 years has gone by in a flash.

Baby C has had some sniffles this week but that hasn’t held her back much. She has two major tricks—waving hi (and perhaps saying Hi!, it is hard to tell) and flinging both arms over her head when you say “Yay C!”. She will also play peek a boo somewhat consistently. Everyone seems to adore her—she has a very winning, open smile. She continues to be a fantastic sleeper—napping such that I can go to the gym, bedtime without much fuss and sleeping until morning most nights. She loves meat and happily eats almost anything I give her—bits of bread with hummus, Indian food (rice with saag paneer for instance), salmon—except for avocado, which she won’t touch. Today she even had her first candy corn (due to a miscommunication with M). She is a babbling, scooting little charmer who is going through a serious daddy-loving phase right now. At her last appointment she was >95% for height and around 75% for weight (29.5 inches and just under 20 lbs.) She has been enjoying her music and swimming lessons, splashes a ton in the tub, and squeals with delight for certain books.

Why so few photos? Well I got a new camera a few weeks ago and have been trying to figure out how it all works. Unfortunately my favorite lens doesn’t work with this new camera so the learning curve has been steep. However, I now have the ability to make some videos, so the effort will be worth it I think! That said, I haven’t figured out how to show the videos here yet. And it is getting late.

Between costume making and pumpkin item baking, we have been getting our craft on around here. No photos of the costumes G and I wore (batman and wonder woman, respectively) and not sure I will be putting the costume back on any time soon for photos. G helped me customize a red pleather bustier for the wonder woman costume and it was pretty rocking though. Big C picked Aphrodite as her costume, M wanted to be a ghost, and baby C didn’t register any opinion and thus was happy with Big C’s old tiger outfit. Aphrodite’s dress was clearance at Nordstrom’s and just needed some strap shortening. Her headpiece was put together by C and G using some items from Joanns and accessories were all things from around the house. M is wearing a huge white sweatshirt to which we attached various floaty fabrics, a hat, and spooky makeup.

Hopefully some better pictures on Halloween.

M and I put in some serious kitchen time today thanks to a post on this blog, Brown Eyed Baker. I made the maple pumpkin cheesecake bars on Friday and today we made pumpkin donut muffins and pumpkin spice latte cupcakes. Yum.

Several more cans of pumpkin in the pantry, and multiple fancy pumpkins awaiting roasting in the garage, so there should be lots more baking in the coming weeks!

September found us in NYC for a wedding reception. There was a lot of discussion about appropriate attire leading up to the trip (what is business casual for children?) with the oldest child at one point suggesting we go to a prom store to buy her dress. Hmmm. Daughter the Middle had decided on wearing something I made for her, and the oldest was going to as well but the day before we left I decided that was just not going to work (dress neither nice enough, flattering enough, nor seasonally appropriate) and a quick trip to Nordstrom’s ensued. I think we nailed it: 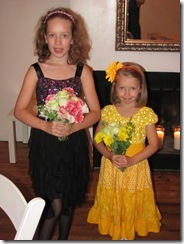 Sparkly dress with sparkly cardigan? And sparkly headband. And sparkly earrings. I am a sucker, but I did nix the requested sparkly purse. Also insisted on black hose (she wanted white tights!). M is wearing her “butter dress” which she requested over the summer, noting that she didn’t have any yellow dresses in her wardrobe. Somehow yellow is gold is butter in Minecraft? I don’t know but she was excited to go to the fabric store and pick out some yellow fabrics. I added two more on a different trip and heavily modified a peasant dress pattern that I had (used to make the dresses here)—lengthened the bodice, added a wide pleated sash and long ties on the back to make a big bow, and altered the skirt to be three tiers of ruffled goodness. And surprise, surprise, Nordstrom’s had a sparkly cardi that matched her outfit and the perfect headband as well. So happiness all around. Plus, the happy couple (Uncle D and Auntie J) put together some bouquets for the girls and they were ecstatic.

The trip was pretty quick although some parts felt longer than others…waking up at 3 am for our flight out, for instance, or waking up at 4 am after the reception as one of the children was vomiting copiously in the bathroom. She was fine later that morning, and many apologies to the hotel staff for the huge pile of disgusting towels we left behind. (For some reason said child was sat on the toilet and vomited all over the floor.) Ah, parenting. Where was I? Right, NYC. We did walk the Highline and…well, that was pretty much it besides hanging out with family. 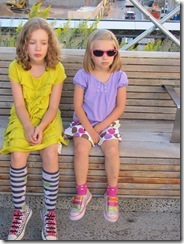 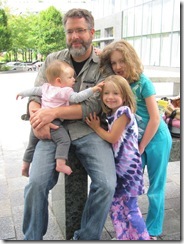 Baby C did great on the trip, sleeping on both plane rides. In fact, 20 minutes after that last picture, she fell asleep waiting for the car service.

Back here, M has been playing soccer every Wednesday night. Enthusiasm and skill levels are not matching each other, which one is higher is left as an exercise for the reader. Except for the day it rained the whole time, it has been fun cheering on her little team.

I finally finished a project I promised C several weeks ago and kind of thought I would have done for the first week of school, second at the latest. Ha ha ha. Took me three days at the end just to get the snaps on the pockets. But she took it to school today and said everyone asked about it and she told each one that her mom made it for her and then gave me a huge hug. So, you know, worth it. 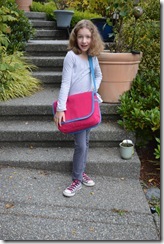 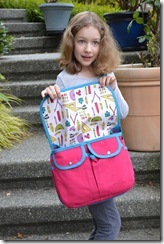 It is helped here by a folder being inside, otherwise it is a little bit floppy. My fault as I thought the pinkish twill would be sturdy enough to give the bag shape—I should have interfaced a lot more. Pattern is from Oliver and S Little Things to Sew. Check out that perfect school supplies lining fabric!!

Last weekend the weather was great, and that doesn’t always happen in October in Seattle. After seeing Pippi Longstocking at our favorite children’s theatre, we decided to hit the pumpkin patch. Photo opportunities abounded. 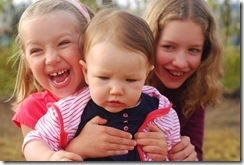 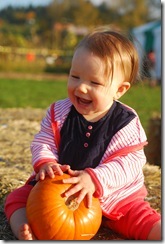 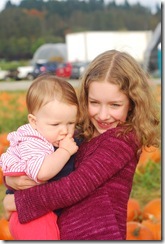 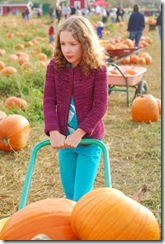 …which of course I cannot find right now. We are in ongoing computer hell so I can’t access all my old photos and although I was sure it was on the blog, it doesn’t seem to be. Perhaps I have made the picture up? Poop. It was going to be a cute comparison between C then and C now….C who is turning 10 (!!!) next week.

Two weeks ago I had to send someone a headshot. Of myself. Which resulted in multiple hours of trying to find recent photos of myself. I think that there are not any without children, and very few even with children. Although I was forgetting those NYC shots. Hmm. While we were at the pumpkin patch I didn’t get any solo shots, but did get G to photograph me with that silly baby. Looking at the photos overwhelmingly reminded me why I don’t do this more often–obsessing now about soft chins, age spots, bad posture, and crazy neck wrinkles.

That said, I am so happy to have these pictures.